June was a pretty good month.
We saw Savoy Brown, Manfred Mann's
Earth Band and Kiss on the same bill.
12 days later we saw Ten Years After,
King Crimson and Strawbs at the
Cow Palace. Slade cancelled.
Savoy Brown were going as "The
Boogie Bros." and had Miller Anderson and
Stan Webb backing Kim Simmonds.
A real super group! This was the 2nd
time we saw Manfred Mann. Kiss were
new to me and 3rd on the bill. The house
rocked that night. The Cow Palace shows
were some of my favorite bands, but
we had to sit too far back to get a
good look at the groups.
Past Months of British Rock Calendar 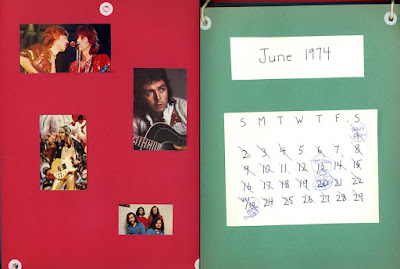