August 1974 was a quiet month. I didn’t go to any concerts. I wrote down Rory Gallagher for the first day of the month, but did not see that show. I do not have any record of him playing the Bay Area at that time, so I assume he cancelled. Too bad. I would have loved to have seen him again.
You may notice my calendar has “Penney’s” marked down. That would be the photos I had developed from the previous concerts. Mine or my friend, Dan’s. Penney’s was a department store near by. Believe it or not, they did great printing work. I am still impressed with the prints I had done there.
You will also note John Lennon’s name on the 23rd. He was interviewed at a radio station in San Francisco that evening. It was reported in the local news that he would be there. My friends and I  planned to go and meet him as he left the building. It was a once in a life time chance and I was very excited at the thought of actually meeting John Lennon in person! That evening I called my friend, Gary, who had a car, and I didn’t. He had changed his mind and decided not to make the trip from the East Bay, some 30 minutes away. Since I was without wheels and BART had not been completed at that time, I was unable to go. It was three days after my 21st birthday. Yes, we are still friends.
To see past calendars - British Rock Calendar - July 1974 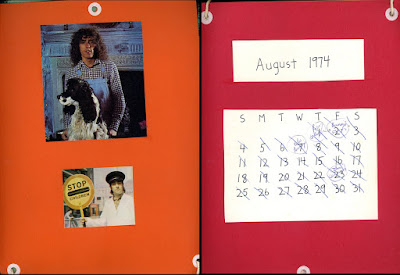